Stem cell research is at the forefront of modern day health science and receives considerable media attention because of the controversy surrounding it. When discussing embryonic stem cell research, moral questions are raised that evoke emotive arguments which tend to be exaggerated by the press and can lead to public confusion and misinformation about the subject. It is important to understand the significance of stem cell research and current stem cell therapy because of the implications that they have for treating disease conditions in humans and animals.

What are stem cells?

Stem cells are the foundation of normal growth and development on any organism and serve as a biological repair system fo the body.  Stem cells are found in the early embryo, the foetus, the placenta and umbilical cord as well as in mature tissues and organs throughout the body.  Under certain conditions, stem cells can be induced to become other types of cell, for example blood cells, muscle cells or nerve cells.  Stem cells occurring in the various structures at differing stages of growth and development herald different levels of potential, which continues to be a central theme of enquiry within the research community.

There are two main types of stem cells that are being investigated for their potential use in research and medicine. They differ in their degree of differentiation and ability to self-renew. Embryonic stem cells come from a four to seven-day-old embryo. They have the ability to form virtually any type of cell found in the human body, but are not capable of developing into a whole new organism. Adult stem cells are more specialised than embryonic stem cells. They are found in the majority of tissues and organs in our body and generate the mature cell types within that tissue or organ. They have a restricted ability to produce different cell types and to self-renew. A third category of stem cells does exist called embryonic germ cells that are derived from the part of a human embryo or fetus that will ultimately produce eggs or sperm (gametes). Little research is now performed using this type of cells because they do not appear to be as versatile as embryonic stem cells.

Stem cells that have the potential to develop into any of the cell types found in an adult organism are called pluripotent. Embryonic stem cells are pluripotent. These cells have the greatest potential to become a wide range of other cells found in various tissues and organs within the body. Stems cells that only have the potential to make a few cell types in the body are called multipotent. Adult stem cells are multipotent. Based on research conducted to date, stem cells derived from adult tissues appear to have a more limited potential, as they are not able to differentiate as widely, often confined to reproducing cells identical to the those found in the tissue from which they were harvested. Cells that are capable of forming a completely new embryo that can develop into a new organism are called totipotent. A fertilised egg cell is totipotent as it has the potential to develop into a new organism.

At the stage of an early embryo, primitive stem cells begin the process of tissue and organ development. These cells have the potential and material to create any type of tissue or structure in the body. They can theoretically divide without limit to replenish damaged or diseased cells. The division of cells throughout the life of the organism is fundamental to the development, growth and maintenance of tissues and structures within the body, but is most obvious in the rapid growth phase of a developing foetus. Controlling this differentiation process is one of the biggest challenges in stem cell research.

The ability of stem cells to replace damaged or diseased cells and the significant potential to induce stem cells to develop into different cells underlies the degree of interest and levels of investment in this field of enquiry. The potential for stem cells as a treatment for a number of serious diseases and injuries offers hope to millions of patients and clinicians worldwide, but there is much scientists are yet to discover and confirm before many of these hoped-for treatments become a reality. In the short term, stem cell technology is likely to result in a number of products and tools for basic research and possibly drug discovery before the development of cell-based therapies in human medicine. In veterinary medicine however, we are currently using cell based therapy to treat certain important ailments, particularly in horses.

Adult stem cells are undifferentiated cells found in tissues and organs. They are capable of self-renewal and their differentiation is mainly restricted to form the cell types of that tissue or organ. Their main role is to maintain and repair the tissue in which they are found. Skin stem cells, for example, give rise to new skin cells, ensuring that old or damaged skin cells are replenished.

It now appears that all tissues probably contain adult stem cells, but only in very small numbers. In each tissue, they are used to produce new mature cells as old ones die in the natural processes of cell death. They may also remain dormant until activated by disease or injury to contribute to the repair process. Their small numbers make adult stem cells difficult to isolate but they have been successfully isolated from the brain, bone marrow, blood, muscle, skin, pancreas and liver. Most research in veterinary medicine has been carried out on blood forming (haematopoietic) stem cells isolated from bone marrow and blood. Haematopoietic stem cells, for example, are found in the bone marrow and give rise to the many types of cells found in the blood, including red and white blood cells and platelets. The existence of these types of stem cells has been known for a long time and bone marrow transplants containing such cells have been used, for over 30 years, to treat people with a variety of life-threatening disorders such as lymphomas, leukaemia and thalassemia. In veterinary medicine, the superior healing properties of bone marrow are used to aid in fracture repair, to treat bone infections (osteomyelitis) and to fill bone cysts.

Advances in veterinary stem cell research have lead to the development of exciting new treatments for certain conditions using adult stem cells. Currently this is the type of cell based therapy being used clinically in horses at the Equine Centre at Murdoch University. 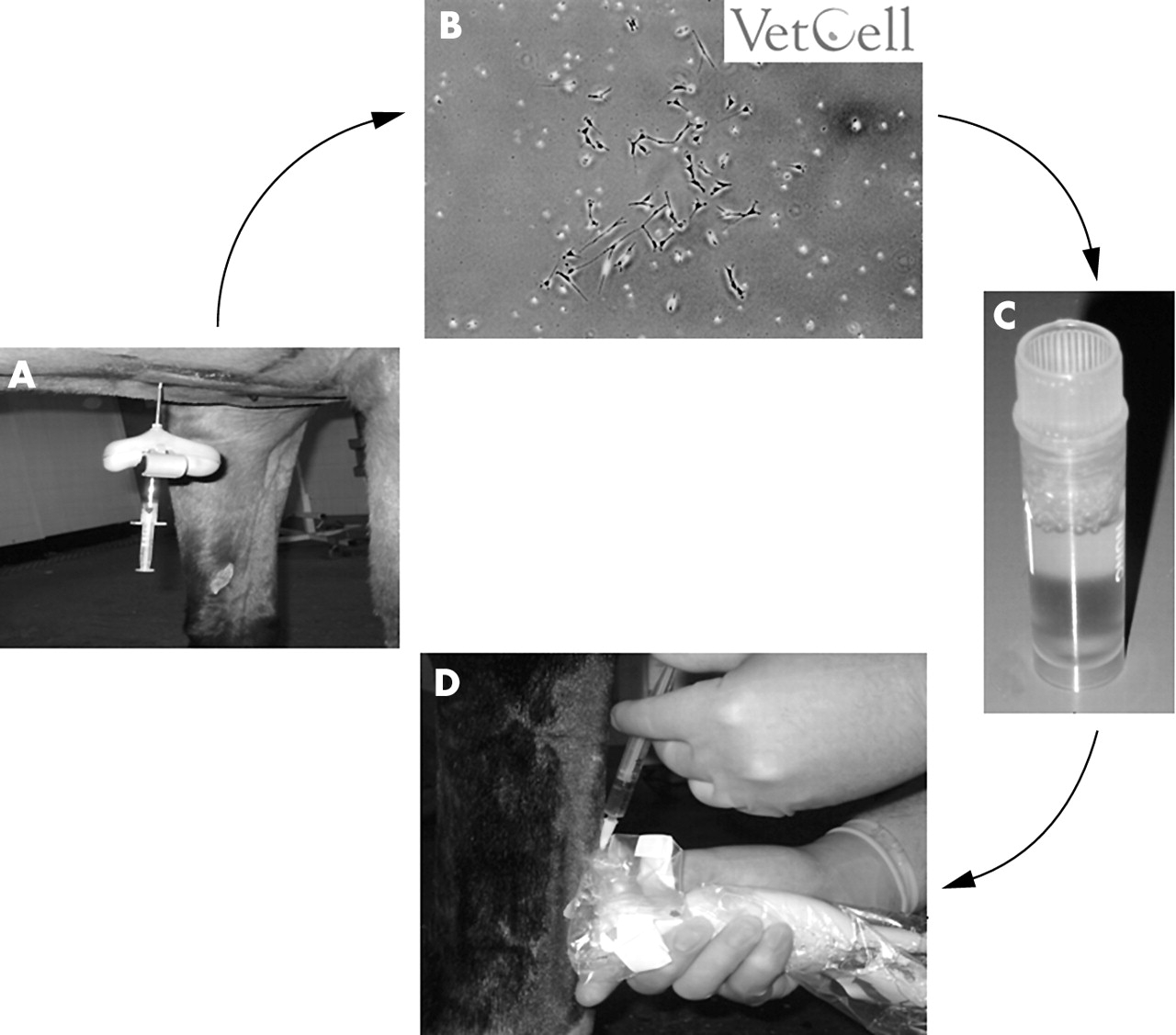 We have been using stem cell therapy at the Equine Centre at Murdoch University for the last four years to treat tendon and ligament injuries. Bone marrow contains stem cell that can be subdivided into haematopoietic (blood forming) stem cell and mesenchymal stem cells. Mesenchymal stem cells can give rise to bone cells (osteoblasts), cartilage cells (chondrocytes), tendon cells (tencoytes), scar tissue cells (fibroblasts) and even fat cells (adipocytes). Apart from containing mesenchymal stem cells, bone marrow also contains a plethora of helpful factors known as growth factors. These are important in the orchestration of cellular responses to a whole range of signals, either between cells or between cells and tissues in which stem cells may be implanted. They also play a pivotal role in the healing of tissues. Important factors such as insulin-like growth factor (IGF-1), transforming growth factors (TGF) and bone morphogenetic proteins (BMP) found in bone marrow have been extensively studied for their potential use in tissue engineering. These factors interact with the stem cells found in bone marrow to direct the future function of the cells. For example, they may increase the number of cells or may increase the production of certain cell products such as collagen or other extra-cellular matrix components. The precise way in which all these cells interact with the growth factors and their surrounding environment is the subject of considerable research at the present.

One of the stem cell therapeutic techniques that is used at the Equine Centre is autologous bone marrow implantation into damaged areas of tendon and ligaments. We have been performing this procedure for the last four years at Murdoch University with good results. Typically, a racehorse will present to the Centre with a bowed tendon (tendonitis) or suspensory ligament strain (desmitis) and after it has been evaluated clinically and the lesion has been ultrasounded, treatment recommendations will be made. To be a suitable candidate for stem cell therapy, the lesion should be recent (less than 4 weeks old), be greater that 10% of the cross-sectional area of the tendon or ligament and have a discrete core lesion with complete loss of within the centre. Bone marrow is collected sterilely from the horse’s sternum by an assistant using a special bone biopsy needle. It is then transferred to the surgeon who implants it into the area of damage within the tendon or ligament using ultrasound guidance. We have found at Murdoch University that using the ultrasound machine to accurately determine the site of placement of the bone marrow within the damaged structure is crucial to the procedure. Treated horses are then bandaged and placed on a controlled exercise program for 4-6 months (suspensory ligaments) or 9-12 months (tendons). The healing of the tendon/ligament is monitored at 2 monthly intervals after surgery with ultrasound. Many horses have been successfully treated with this technique and have returned to race successfully whilst others are still rehabilitating.

More recently we have been able to offer clients another stem cell based therapy for tendon and ligament injuries that has developed and marketed though a company celled Vet Biotechnology. After suitable case selection (see above), a sample of bone marrow sample is harvested from the patient and transported to the company’s laboratory where the mesenchymal stem cells are separated from the blood forming cells in the bone marrow sample. The mesenchymal cells are then propagated to increase their number to approximately 4 million cells. The cells are then returned to us in two small aliquots of special media collected from the patient’s original bone marrow sample, containing the important growth factors involved in tissue healing. The cells are then injected into the damaged area of tendon using ultrasound guidance. Although this procedure is more expensive, it seems logical that it will prove to be superior in terms of tendon healing than the original bone marrow implantation technique. However, at the time of writing, there have been too few horses that have had the newer stem cell therapy to be able to make comparisons.

At Murdoch University we are currently involved in exciting new areas of stem cell research and therapy with direct application to treating injuries in racehorses. Our focus is in the area of injures to equine athletes that cause considerable wastage within the industry, in particular repair of damaged tendons and ligaments as well as cartilage repair. As our understanding of how stem cells can be used to repair damaged tissues increases, so too will our ability to successfully treat injured horses and return them to a satisfactory level of performance.